Dr. Hector Garcia's lifelong fight for equal rights passed down to his daughter

From fighting for equal rights to pushing people to the polls, Dr. Hector Garcia was a Texan who had a vision that now his daughter calls her own. 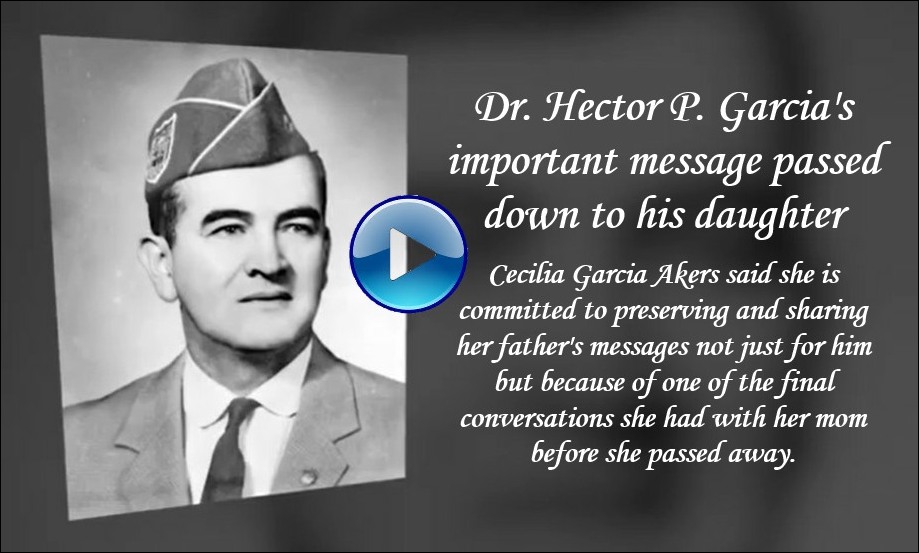 Dr. Hector P. Garcia was a Mexican American physician and World War II veteran who spent his life fighting for the right of others.

It's a battle that his daughter, Cecilia Garcia Akers, has now taken on herself.

"It's important to talk about the impact he had not only locally or in Texas but nationally," Garcia said. "His story needs to be told."

Cecilia Garcia Akers lives in Corpus Christi, like her father before her. Growing up, Akers remembers him being strict but fun.

"He was just a kind man, but he had a vision for not only himself but his family," Akers said.

At times, Akers said there was hatred towards their family because of the messages her father gave and stood for.

"It was pretty brutal," Akers said. "I can't explain it any other way."

Akers didn't fully understand her father's vision and fight for equality until after he passed away in 1996. She said he was protective of his work because of how controversial it was at the time.

Garcia served in the Army during World War II and went on to create a medical practice in Corpus Christi after the war. He served the poorest minorities in the community with or without health care.

Garcia eventually created the American G.I. Forum in 1948. This was sparked by Garcia's growing concerns for Mexican-American veterans.

This group helped these Mexican American veterans file claims with the Veteran's Administration and fought for social justice.

In 1945, Garcia helped the widow of Mexican American private Felix Longoria, who was told by a South Texas funeral director that her husband couldn't be buried there.

"He's told that, 'No, she could not wake Felix's body there because all Mexicans do is get drunk and have fights and the whites wouldn't like it," Akers said.

So Garcia reached out to Lyndon B. Johnson, who was a U.S. Senator at the time. Johnson helped them bury Felix's body in the Arlington National Cemetery— becoming the first Mexican American buried there.

"He could have not done his advocacy," Akers said. "He had made it. He was a physician. But he knew that he was there to influence and to make life better for everyone."

Garcia was also an advocate for voting, pushing people to the polls any chance he got.

Akers remembers her dad handing out sample ballots to anyone who came into his office.

"He would go around in a pickup with a mega horn, all through the west side of Corpus [Christi], telling people in English and Spanish to go vote," Akers said.

In 1960, President John F. Kennedy appointed Garcia as his first Mexican American representative. He was the national coordinator of the Viva Kennedy! clubs.

Akers said she is committed to preserving and sharing Garcia's messages not just for her father but because of one of the final conversations she had with her mom before she passed away.

"We promised her that we would go ahead and take the initiative to get him the recognition that he deserves," Akers said.

"I think our past and our ethnic makeup is very, very important to our future," Akers said.

The foundation has donated more than $350,000 for scholarships and health care services.

"Looking at his life, I have to follow what he taught me," Akers said.

Please check your e-mail for a link to activate your account.
Book Tour Show Your Support