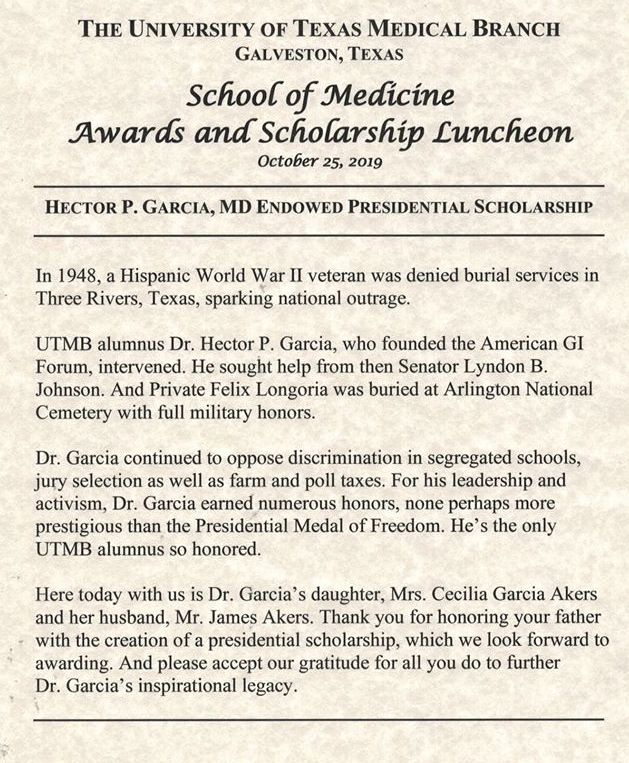 FORMER ASSISTANT SECRETARY OF THE NAVY NAMED AS

The Dr. Hector P. Garcia birthday celebration luncheon originated on January 17, 2014 to honor what would have been Dr. Garcia’s 100th birthday.  The 2020 celebration is slated for Friday, January 17 at 11:30am and will be the foundation's seventh annual event.  Held at American Bank Center’s Henry Garrett Ballroom, it has evolved into the primary and major fundraising event for the foundation’s success.  Proceeds from the Dr. Hector P. Garcia memorial foundation continue to support education through scholarships and tuition assistance at institutions of higher learning.  Contact Anna Flores at 361-241-4535 for tickets and sponsor information. For more information on the event, or to donate, please contact Jim Akers at 210.508.0824 or jakers2@satx.rr.com.

From 1999 to 2000, Garcia was selected to be a White House Fellow, serving as a special assistant to the U.S. Secretary of Education, followed by sea duty aboard USS CONSTELLATION (CV 64).  In 2002, Garcia returned to South Texas as a flight instructor at NAS Corpus Christi, and after transferring to the Navy Reserve, commanded Reserve Training Squadron 28.

Garcia practiced law with a Corpus Christi firm beginning in 2004 and was elected to Texas House of Representatives in 2006, representing Nueces, Aransas, San Patricio and Calhoun counties, and serving on the Agriculture and Veteran's Affairs Committee.

He was appointed by President Obama as the Assistant Secretary of the Navy, confirmed by the U.S. Senate, and served from 2009-2015.  Following the change of Administration, he spent three years in Seattle as Amazon’s Director for Global Associate Development.  He is now a Director at Deloitte in Washington DC, helping lead the firm’s work on the Navy’s manpower transformation.  He has been a member of the Council on Foreign Relations, and is on the Board of Directors for the Wounded Warrior Project.

Garcia is married to a Harvard Law classmate, Denise, they have four children, and now live in Arlington, VA.